In addition to significant morbidity and mortality, the coronavirus pandemic resulted in a severe contraction in global economic output followed by a sharp decline in government and corporate revenues. The unprecedented level of emergency programs launched by governments across the globe have caused government deficits and debts to rise to levels far beyond those recorded during the global financial crisis. We see a similar situation with central bank stimulus.

Production and distribution of the currently approved coronavirus vaccines are facing some issues. Moreover, uncertainty is rising regarding coronavirus mutations and possible vaccine side effects. Regardless, the progress in vaccine rollout as well as anticipation of a return to normalcy continues to fuel investor and consumer optimism.

When we first detailed the impact of the pandemic in mid-March 2020, we emphasized that no amount of stimulus would provide a lasting solution. Officials were focused on stimulus because they did not think a vaccine would be ready until late 2021 at best. We realized that the discovery of a safe and effective vaccine was the only solution. We also stated that we believed a vaccine would be discovered and ready by late 2020.

Now that we have left what will be remembered as one of the worst years in recent memory, things are looking relatively better. All nations are expected to deliver at least a sizable rebound in growth compared to 2020. U.S. 2020 full year GDP growth is expected to have suffered the worst decline since the immediate aftermath of WWII at -3.5% (U.S. 2021 GDP growth is expected to be 5.1%). As bad as this looks, the fact is that the U.S. economy fared much better than most other nations. Overall, most nations suffered either the worst economic contraction on record or the worst since the WWII era. 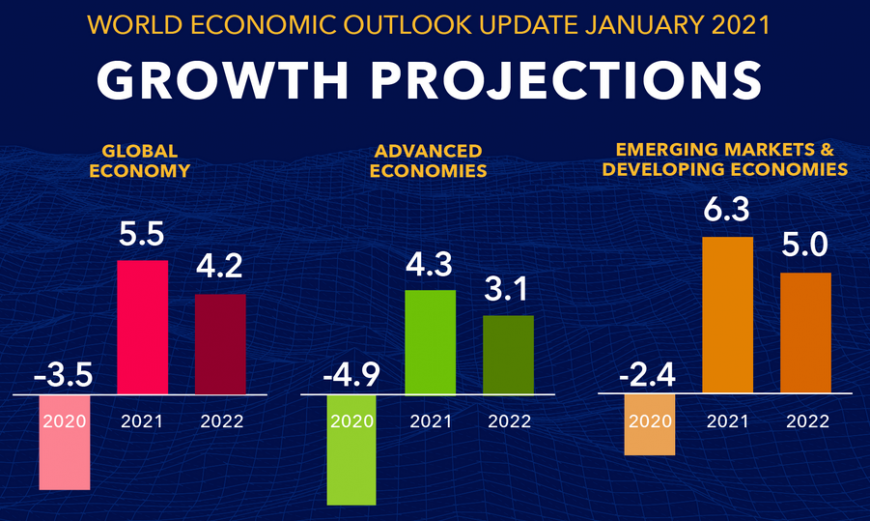 Specifically, SE Asia was hit particularly hard, but the region is expected to mount a strong recovery in 2021, with India leading the world at 11.5% according to the IMF’s January 2021 update (up from the previous 8.8% from its October 2020 WEO).

Meanwhile China is expected to grow its economy by 8.1% (down from the previous 8.2% estimate by the IMF in October 2020).

Fiscal stimulus totaling $14 trillion related to the coronavirus pandemic has swelled global public debt to an estimated 98% of GDP in 2020. While this is certainly concerning, keep in mind that as the GDP growth rate recovers, this measure of debt will decline. Furthermore, this high level of debt does not...