The Greatest Forecasts Ever Made

We will be making more of these videos in the future so the newer guests of the website can see that no one can come close to the track record of Mike Stathis.

We hope to make 20 or more videos in 2014 showing Mike's track record from the pre-crisis and post-crisis period. We also welcome guest submissions.

Clearly, Mike Stathis predicted the financial crisis and economic collapse more accurately than anyone in the world. This is a statement of fact. And we are prepared to risk $100,000 to back this claim.

UPDATE: As of January 1, 2015 we raised this to $1 MILLION.  See here and the extension of the deadline here. 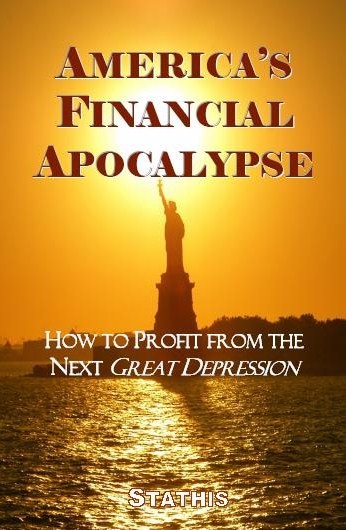 For those of you who have not already read America's Financial Apocalypse, you are going to see that Mike Stathis was writing about so much of what has been dominating the headlines years in advance.

In addition to the collapse and bailout of Fannie Mae and Freddie Mac which was predicted by Stathis, the collapse of the stock market (which Stathis nailed with precision), as well as the collapse in real estate prices (which also nailed), he was the first financial expert to address in the context of an economic collapse several topics that have since become huge issues of discussion and debate.

The list below is brief and incomplete. Remember, these topics were just a small handful that were included in Mike's 2006 book:

1. Fannie Mae and Freddie Mac would collapse to the point of needing a government bailout.

2. The US real estate market would collapse by 35%, but many parts of California and Florida, as well as cities like Las Vegas would experience a 50-60% collapse in prices.

3. Wealth and income disparity (this only became a topic of discussion in since 2011)

4. For-profit college scam (this only became a topic of discussion in since 2011)

5. Soaring precious metals pricing followed by their collapse (Mike might be the only financial professional to have made this forecast)

6. The need to trade precious metals (Mike may have been the only financial professional to provide these recommendations early on)

7. America's huge infrastructure gap (this only became a topic of discussion in since 2010)

9. America's destructive trade policies (the media continues to keep this topic out of the discussion)

10. Entitlement crisis (this only became a topic of discussion in since 2009)

13. Manipulation of economic data by Washington (Mike may have been the first financial professional to provide a detailed treatment on this topic)

14. The 401k scam (the media continues to avoid discussing teh disturbing realities surrounding 401k plans, fees, and the shift from pension plans)

16. Why buying a home is usually not a good investment (Mike could be the first financial professional to have shown why this is case; only after the real estate collapse have some made this point - Monday morning quarterbacking)

17. Predicted Dow Jones 6500 (Mike is likely the only financial professional to have discussed this as a possibility prior to 2008)

18. Predicted the boom in the rental market

19. Predicted the boom in reverse mortgages

21. The commodities correction after the Beijing games

Check here for additional forecasts from this book.

What Should You Do If You Can't Afford Our Research?

We get emails all the time from people telling us that they want to subscribe to our research and newsletters, but they just can&rsquo;t afford it. That&rsquo;s hogwash.

Read This to Understand Why You Should Manage Your Own Money

You might recall that I have profiled a few mutual fund disasters. If you haven't already read these articles, I&nbsp;strongly suggest you do so ASAP. &nbsp; Mutual Fund Disasters: An Overview &n...

Mike Explains How the Media's "Experts" Are Misleading You

In coming weeks/months, the site will be permanently closed to the general public. &nbsp; Only active Members and Clients will be able to access the website. The email alert list will be phased......

Opening Statement from the March 2015 issue of Dividend Gems

Opening Statement from the March 2015 issue of Dividend Gems First published on March 13, 2015 for subscribers to Dividend Gems &nbsp; We have been discussing several themes in recent months. Firs...

In this video, Mike blows the lid off the entire financial industry, exposing it for what it is. Mike presents a chilling reality that virtually NO&nbsp;ONE&nbsp;outside of the industry knows about....

Opening Statement from the February 2015 issue of Dividend Gems

Opening Statement from the February 2015 issue of Dividend Gems First published on February 16, 2015 for subscribers to Dividend Gems In the month of January we released three videos discussing se...

Opening Statement from the January 2015 issue of Dividend Gems

Opening Statement from the January 2015 issue of Dividend Gems First published on January 19, 2015 for subscribers to Dividend Gems As we expected would be the case, over the past several months...

Opening Statement from the December 2014 issue of Dividend Gems

Opening Statement from the December 2014 issue of Dividend Gems First published on December 21, 2014 for subscribers to Dividend Gems &nbsp; Over the past several months economic headwinds from ar...

Would You Like to Get Our Research Publications for Free?

Once again, Mike Stathis nailed the most recent market sell off in April.

Excerpts of the October 2014 Economic and Securities Supplement Audio 2

As you listen to these excerpts from the October 2014 research (October 12 2014 Global Economic Supplement Audio 2) note the value in the securities discussion alone. Also note that most of these sec......

We just released an important update for gold, currencies and US stock market forecasts. This report was published on video and discusses gold, silver, US dollar, Swiss franc, euro and the US stock...

Note:&nbsp;We are no longer releasing regular excerpts of Mike's Market Forecasting to the general public. We may release some excerpts to the public in the future if we have time and if we so deci......

It's simple folks. The Jewish Mafia wants to SCREW&nbsp;YOU&nbsp;by creating the illusion of valuable content. This is all part of the Jewish media scam.

Opening Statement from the October 2014 issue of Dividend Gems

Opening Statement from the October 2014 issue of Dividend Gems First published on October 19, 2014 for subscribers to Dividend Gems &nbsp; The irrationality of the masses coupled with the IMF&rsquo...

&nbsp; That&rsquo;s right. Mike Stathis accurately forecast the recent market selloff AGAIN. Yet, he continues to be banned by ALL&nbsp;MEDIA. Instead the criminal media feeds its unfortunate vic......

Not only has one of our dividend gems returned 50% (excluding dividends) over the past 5 months (and Mike recommended readers buy positions right when it bottomed) but Mike also successfully guided ac...

If you did not already know what Mike talks about in this clip, it means you are spending your time filling your head with trash from the bought off media.&nbsp;

Stathis Warned about the Collapse in Emerging Markets in June 2013

The release of this video is part of a new series we have recently launched for the purpose of helping the public become more familiar with the track record and insights of Mike Stathis. Make sur...

Remarkably, even after many years of bad performance, John Hussman still manages several funds with more than $2 billion under management. Let's take a good look at Hussman and see if he is a good f...

&nbsp; &nbsp; &nbsp; We will be making more of these videos in the future so the newer guests of the website can see that no one can come close to the track record of Mike Stathis. We hope to mak......

We have released an instructional video to subscribers of the Intelligent Investor entitled "Discussion about How to Look at Each Security."&nbsp; In this video, Mike goes over some finer points on...

Mike Stathis is THE TOP Investment Mind in the World