I exposed Ron Paul as a huge scam artist many years ago when he was fooling the masses with his complete pointless and distracting "End the Fed" message.

Why is the "End the Fed" rant pointless and distracting?

Because one should focus on things they might possibly affect change rather than obsessing on things that they have no chance whatsoever in changing.

Focusing on things that stand zero chance of changing actually serves to distract from real issues that matter and that might be changed.

For instance, Ron Paul could have focused on the constant failures of securities regulators to prosecute billionaire criminals who commit various forms of securities fraud.

He could also focus his attention on the fact that the hedge fund and private equities industries are stealing massive amounts from pension plans.

But Paul wouldn't go after Wall Street because his purpose is to pretend to want to help the people. The past thing Ron Paul would do is bite the hand that feeds him.

You see, Ron Paul has turned into a penny stock, copywriting scam artist working for the world's biggest copywriting boiler room and scam center in the world.

Unfortunately, I don't have the time to review the details of the psychological tactics behind his "End the Fed" campaign here. But a review of the following video might refresh your memory. Ron Paul and Many Other Frauds EXPOSED

Ron Paul has also been aligned with the gold pumping syndicate of con artists and frauds for decades. As a part of his duties, Ron Paul has been scaring his naive cult members out of the longest stock bull market in U.S. history from day one.

I will show you direct evidence of this claim shortly.

The following article is a follow-up to one that I published a few years ago.  Ron Paul: Paid Whore for Scam Artist Porter Stansberry

Even before I wrote the aforementioned article, I exposed Ron Paul and his various disinformation statements regarding healthcare and the economy several years ago.

Ron Paul: Wrong on the Economy, Wrong on Healthcare (Part 1)

Ron Paul: Wrong on the Economy, Wrong on Healthcare (Part 2)

I also exposed Ron Paul's "End the Fed" and "The government is bad" con game soon after.

I never fell for Ron Paul because his tactics were too obvious to me.

If you fell for Ron Paul, you've probably fallen for many other con artists.

By the way, if you would like some help clearing your mind, the single best way I know of is to become a member of this website.  I cannot tell you how many times members and clients have emailed us sharing their story of how our content has made them a better, smarter and more aware person.

And as much as Ron Paul has served as a gold pumper throughout the years, one would have assumed that at least some of his supporters would have checked into his investment performance to see whether he was at least a reasonable investor given that all members of congress are required to reveal their investment holdings.

But of course, sheep never seem to ask the right questions because they lack the most basic human ability that sets us apart from wild animals.

Critical reasoning.  That is why they are sheep.

I checked Ron Paul's investment performance several years ago published an article revealing that it's been a disaster. His investment portfolio has consisted only of precious metals. And they've all been losers.  Ron Paul, Investment Disaster

As far as I know, I was the first person to expose Ron Paul. That isn't something to boast about.

Instead, it points to a very problematic society that's filled with people who are fooled by hucksters like Ron Paul as well as more rational people on the other side of the fence who know he's a charlatan, but can't pinpoint specifically why or else refuse to point it out.

A simple search on our website will reveal numerous articles and videos I've published revealing Ron Paul's disinformation, his various fear-mongering con games and his motives. 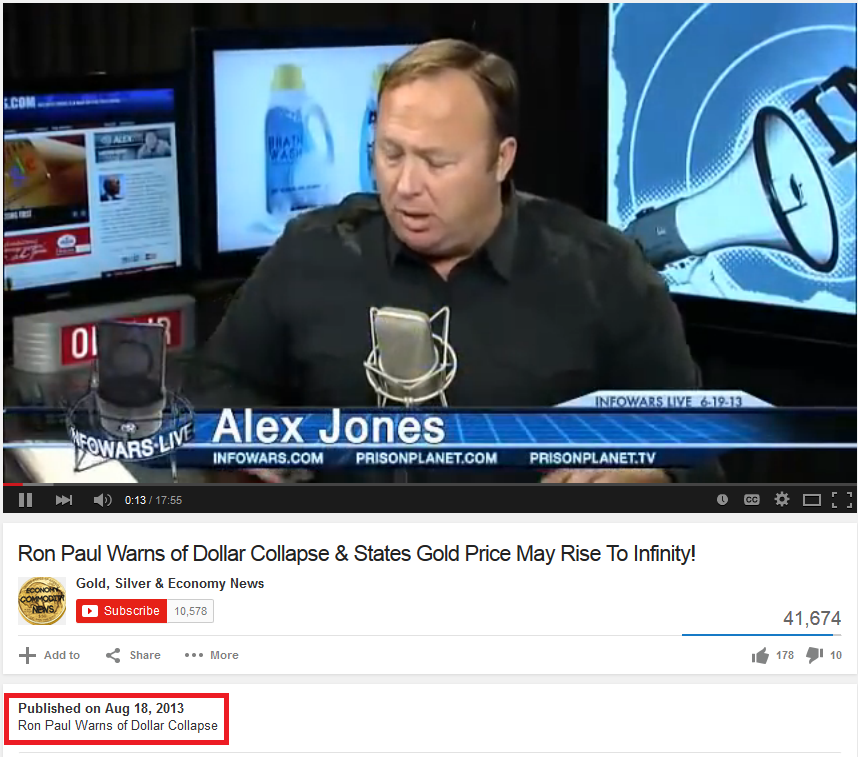 One thing I will point to as a key focal point of many scams and scam artists is their affiliation with the so-called "libertarian" mindset.

If there is indeed a bigger farce today than the libertarian pitch, I cannot identify it. However, so-called man-made climate change narrative is certainly a worthy contender.

Now if you aren't sure of what I mean by the "libertarian pitch" as well as the various scams associated with it, you should search through our website because I've covered it quite a few times.

Imagine if you were to build your entire political career based on telling the people that the government is bad.  Do I need to point out that this pitch is designed to get suckers to vote for you so you can be part of the government!

That's what I call exploiting a bunch of gullible saps.

Mike Stathis holds the best investment forecasting track record in the world since 2006.

Check here to download Chapter 12 of Cashing in on the Real Estate Bubble.

So why does the media continue to BAN Stathis?

Why does the media constantly air con men who have lousy track records?

These are critical questions to be answered.

You need to confront the media with these questions.

Watch the following videos and you will learn the answer to these questions:

You Will Lose Your Ass If You Listen To The Media

Retired congressman Ron Paul has been conning people for decades with his "bad government" lines so as to make it appear as if he is one of the few "good guys" in Washington "fighting for your freedom...

Ron Paul's Freudian Slip Regarding Peter Schiff or a Sign of Dementia? You Decide

Those of you who have been following me for some time are aware that I exposed Ron Paul early on as a gold-pumping con man whose modus operandi was to preach "freedom and liberty" in order to lure his......

I’ve already exposed Ron Paul as an agent of controlled opposition working for the Koch brothers. I’ve also previously exposed him as a proponent of the military-industrial complex. That...

Folks, get ready to see Mike Stathis expose Ron Paul and Alex Jones as controlled opposition. Make sure to have a pencil and paper ready to take notes. After you watch these videos you will never...

In this video, Mike demonstrates that Ron Paul is a complete disaster when it comes to investments. According to Mike, Ron Paul’ investment performance through the years is about as bad as one c...

In this video, Mike educates Ron Paul on the difference between interest rates and Treasury yields, explains that winding down from the quantitative easing program by the Fed will not necessarily lead...

Ron Paul and Many Other Frauds EXPOSED

You are NOT going to want to miss this video. Mike tells me it's one of his best videos of the year.

In the past, I have written some pieces on Obama, Alex Jones and Ron Paul. Because I cover so many things, from investment and economic analysis, to healthcare and politics, my time continues to beco...

Ron Paul: Wrong on the Economy, Wrong on Healthcare (Part 2)

According to Paul, healthcare should be run like mobile phone providers!  Okay let's see. Mobile phone carriers tie you into legally-binding service contracts with extortionist penalties for...

Ron Paul: Wrong on the Economy, Wrong on Healthcare (Part 1)

While I do agree with Congressman Ron Paul's position on the Federal Reserve, this by no means should be used as a blanket endorsement of his political and economic views; and certainly not his views...

Peter Schiff: Wrong on the Economy, Wrong on Healthcare (Part 3)

From what I can tell, the ONLY thing Mr. Schiff understands about healthcare is the poor design of private medical insurance. The current system does not provide real insurance. It’s nothing mor...

Peter Schiff: Wrong on the Economy, Wrong on Healthcare (Part 2)

Lesson #5: Extremists are Always Useless and Often Dangerous Certainly, President Obama is not going about things in a manner I would advise. But Peter, you cannot use his extremist approach (or I...

Peter Schiff: Wrong on the Economy, Wrong on Healthcare (Part 1)

I normally don’t bother myself with reading personal views pumped out throughout the Internet. But I came across one of Peter Schiff’s pitches demonstrating just how off the mark he remain...