Are you wasting your time consuming copious amounts of financial media thinking you're obtaining valuable insight and maybe even a competitive edge?

Unless you've been following Mike Stathis, you probably are because he is the only person in the world to have exposed the deceitful and often criminal nature of financial media.

The fact is that if you're paying attention to the media you're not going to gain any valuable insight. If you think otherwise, it's probably because you know so little about investing that you've set the hurdle low for yourself without even realizing it.

Having worked as a financial professional for over two decades, including my early years spent at major Wall Street firms as a merchant banker, financial adviser, adviser to financial institutions, hedge funds, private equity funds, mutual funds, corporate treasury departments, and venture capital firms, you might want to listen carefully to what I have to say about investing.

The problem is that investing is a competitive game whereby you need to know more and be better than other investors or you will be slaughtered.

And you certainly will never gain a competitive advantage by consuming financial media. In fact, it's much more likely for the opposite to happen because media (and especially financial media) is designed to exploit the audience. That means you will become a sheep if you pay attention to financial media.

If you aren't able to gain some type of competitive advantage over other investors you're never going to do well in the investment world.

Investors who have access to our research are provided with a sustainable competitive advantage because they have access to the insights of Mike Stathis. His insights and results back this claim.

Remember that time is limited, so you need to spend your time wisely.

In the worst of situations the financial media is likely to confuse and mislead you. And this will most likely cause you to make countless mistakes and lose loads of money.  Perhaps the worst thing about this result is that you aren't likely to even know why you made the decisions you made, so you will continue repeating the same mistakes.

In turn, constant failure will drive you back the financial media thinking you can gain some type of edge. As you can see, it can easily become a repeating cycle.

It's natural for amateur investors and even many advanced investors to think the media has valuable content that can give you an edge.

If the media was not able to convince you of this it would go out of business because it would not receive advertisement money, which is the main way media makes money.

After all, the media positions is guests as "experts" and "really smart guys."

But the reality is that nearly all of these so-called "experts" are clowns and cons.  We have been showing this by documenting the track record of these "experts" for more than a decade.

On occasion, the media will highlight a stock that's soared over the past year or two in order to make you think they're on top of the game.

Meanwhile, the "experts" featured in the financial media never focused on the stock when it was in the dumps (i.e. distressed) so you never had a chance to determine whether or not to buy it.

Stocks that are in the "dumps" are often distressed for many reasons. Distressed securities analysis is one of the main areas we focus on in the Securities Analysis & Trading Webinar series.

Today, I want to show you a great example of the media highlighting a stock after it soared a year later. The stock is Fluor (FLR).

Meanwhile, Fluor (FLR) was a stock Mike was recommending in early to mid-2020 in the single digits and low teens in the 2020 Security Analysis & Trading Webinar series. 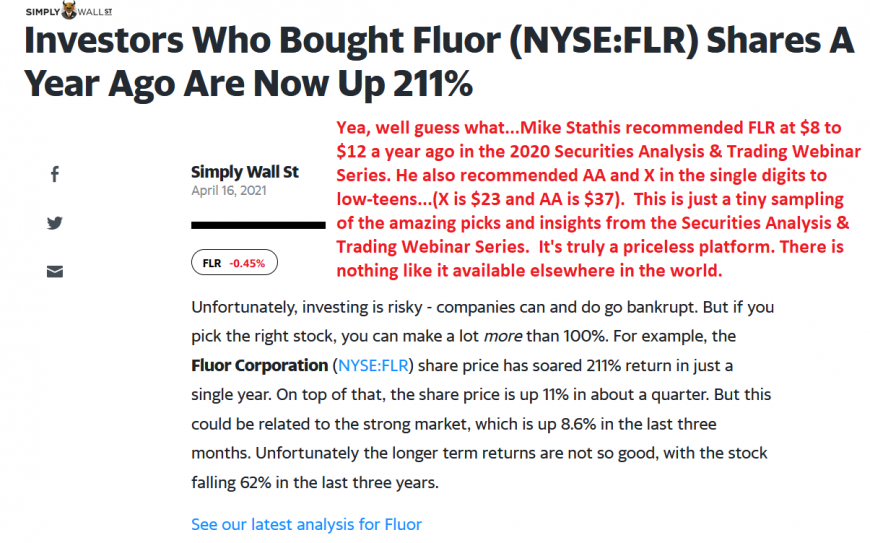 So what's the solution?

First and foremost, you need to avoid all media. This is one of the main messages Mike has been preaching from day one.

By avoiding the media you will reduce confusion and mistakes. More important, you will have fewer inputs in your decision making process, enabling you to better understand why you made certain decisions over others.

Second, you should avoid everyone pitching trading rooms, trading services and so forth. Almost none of these individuals have even worked on Wall Street. They're all complete scam artists preying on greed and sloth.

Most of them have built large followings on YouTube and social media in order to create cults and deprive their cult members of accessing credible sources (there are numerous examples these tactics, but a couple are shadow banning comments and booting members out of Facebook groups). Make no mistake. They are all scammers and clowns.  In short, at best they are wasting your time. And time is the most precious thing in the world. If you don't truly understand that I suggest you wake up.

The best thing you can do is to learn on your own. But learning something so complex like the investment process on your own will take a very long time and cost you huge amounts of money in repeated mistakes.

And most people will never be able to learn on their own.

The best option is to learn about investments and the capital markets while receiving insight and research from a top expert who is ready, willing and able to guide you.

If you're an investor, a trader, a financial adviser or a fund manager, you're short changing yourself if you aren't patched into Mike's research.

Quite simply, Mike Stathis is the best investment analyst in the world today. And his results prove it.

And because he began his career on Wall Street knowing absolutely nothing about investing, finance or economics. he is in the perfect position to teach amateurs because he was once an amateur.

Profit While Learning from the World's Top Investment Analyst

Note: There are countless examples like the one below from our research.

We do NOT have time to publish all examples because we spend most of our time on research. Therefore, you should not expect to see examples like the one below posted on a regular basis. We do not spend any time marketing. We are a research firm, not a marketing firm.

These days we are busier than ever and don't have the time show off our track record.  Moreover, at this stage of his career Mike Stathis no longer needs to show his track record because he has already been proven to be the best investment analyst in the world.

We previously spent a great deal of time highlighting our world-leading track record, but we rarely update it with new material because of time contraints.

Are you wasting your time consuming copious amounts of financial media thinking you're obtaining valuable insight and ma...

Opening Statement from the October 2018 Dividend Gems  Originally published on October 14, 2018  As expect...