Mike Stathis has gone on record now for several years claiming that Warren Buffett has been irrelevant as an investor for the past 20 years.

He has also stated that Buffett has been close to a disaster over the past few years. The facts are on Stathis' side. There are many examples backing this claim. Here we focus on Kraft-Heinz.

Remember, Buffett even lost $30 billion during the financial crisis even after having benefited from insider information about the banking bailout which inspired him to invest in Goldman Sachs, General Electric and many other firms that stood a good chance of filing for bankrupcty without the bailout.

But if Buffett had simply followed the advice and recommendations published by Stathis, Buffett might have made as much as $100 billion in 2008 alone based on our estimates.  And if Buffett had been wise enough to use Stathis as an adviser over the past 10 years, Berkshire Hathaway would probably be worth 3 or 4 times its current value. But Buffett is the greatest investor so he has no need for others to advise him, right? At least that's what the criminal Jewish media filth constantly insist.

I have previously explained why the media promotes Buffett as some investing "God." If you don't know why, you have much to learn about the media.

Buffett has even consistently failed to identify future market leaders in their early stages despite the fact that he has a tremendous advantage in having access to deals others have no access to.

We are not going to even begin to list a few of Stathis' amazing calls because he has nailed so many it's hard to decide which to highight. Check his track record for yourself.  You can begin here and here.

When we launched our Dividend Gems research report in 2011, Heinz was included on the list of recommended securities. A few years ago we mentioned that Buffett decided to follow Mike's lead when he invested in Heinz more than two years after Mike had added it to his Dividend Gems recommended list.

As you review this entry you'll notice that he mentioned that Buffett was paying too much for Heinz. See here. 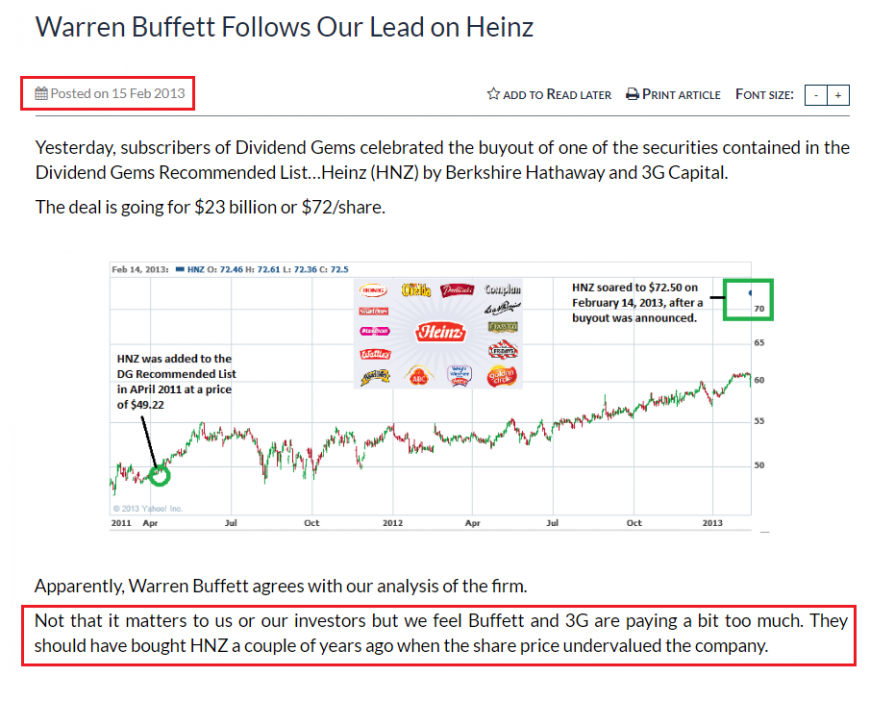 Ever since Kraft purchased Heinz, Mike has stated on many occassions (in various webinars presentations) that Buffett overpaid for the combined Kraft-Heinz entity.

That's right. For several years Mike has been stating that Buffett overpaid for Heinz and Kraft, making it a loser deal.

But it worked out well for our subscribers who profited from the huge pop in the price of Heinz when Buffett bought Heinz for a total of $28 billion, causing the stock price to surge to just over the $72/share buyout.

Two years later when Buffett and 3G bought Kraft, they overpaid by an even larger amount. After the buyout of Kraft, it was combined with Heinz.

Here's another example in a video published in 2013 whereby Mike states that Buffett overpaid for Heinz (check the 3:40 mark in the video located within the following link) Bloomberg Gets in on the Deception.

USA Today is a Jewish-Run Scam that Publishes Fake News

The images below were taken from an article published by the Jewish-run newspaper USA Today proving it as a fake news pu......

The Most Valuable Investment Advice Ever