U.S. Employment Data: On April 12 (April 2020 Intelligent Investor) we released a formal estimate of 35 million (minimum) and 50 million (worst-case) job losses due to the COVID-19 hysteria. As of the most recent initial jobless claims data (week ending June 6) the U.S. has lost another 1.54 million jobs (versus 1.9 million the previous week) for a total of 44.2 million jobs lost over the past eleven weeks.

The gradual reopening of the economy has resulted in some improvement in employment data. For instance, although unemployment (U-3) reached a new high at 17.1% (weekly data) it has since declined to 14.5%. Meanwhile, continuing claims (those who have been collecting unemployment benefits for more than two weeks) declined to 21 million after reaching a recent peak of 25 million.

So long as officials continue to make progress reopening the economy, the labor market will begin to show signs of improvement. But we believe a large percentage of lost jobs (12 to 15 million) will never return. This brings us to a more accurate gauge of unemployment known as the U-6 unemployment rate. The U-6 rate soared to 22.8% in April (unadjusted for corrected data as discussed above).

Washington has created a huge incentive for many Americans not to seek employment. Part of the problem with what is expected to become a persistently high unemployment rate is being exacerbated by the overly generous benefits that have been provided to unemployed workers through the CARES Act. In addition to their unemployment insurance, each worker who lost his or her job is also receiving $600 per week. Thus, a large percentage of U.S. workers (up to 20%) who lost their job since March are receiving twice as much from total unemployment compensation as they earned working full time. Even worse, under the CARES Act there is no requirement for unemployed workers to actively seek employment. Hence, the overly generous assistance being provided to many of the nation’s unemployed population presents a major problem that must be addressed sooner rather than later. 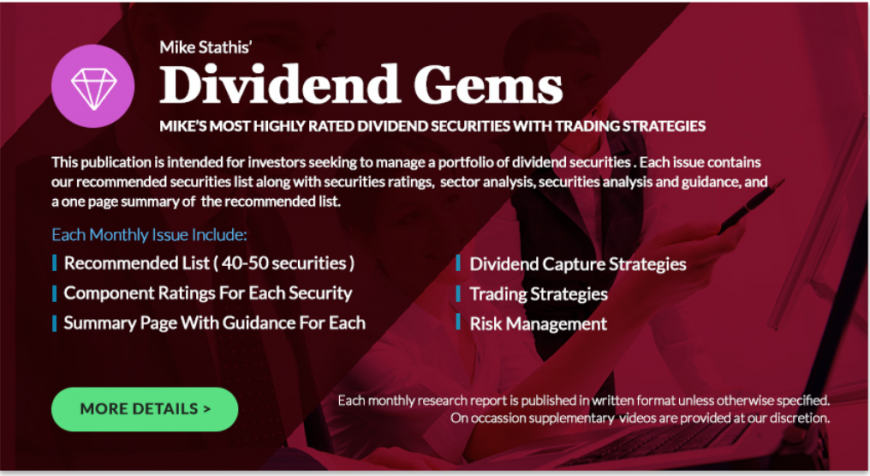 For details about this publication please click here.
*Unless otherwise specified.
Our research publications track record may be examined here.
Print article

Is Mike Stathis TOP Investment Mind in the World?

The following excerpts were from a special securities analysis video series released to investors in May 2012.

Opening Statement from the May 2021 Dividend Gems

Opening Statement from the May 2021 Dividend Gems Originally published on May 16, 2021 Earnings The strong trend of p......