Robert Kiyosaki continues to push the limits of stupidity.

Kiyosaki's latest pitch shows how confident he is that his cult members are brainless idiots.

His message is basically that "If you buy my board game you will become much smarter."

You can't make this stuff up.

Remember, this is a guy who claims he's a great source of business and investment advice even though he has filed for bankruptcy several times.

As well, he has a long history of terrible investment advice while making unverified claims.

But we cannot forget that Kiyosaki also advises you not to go to college.

His lines get even more crazy.

For instance, he also claims that "jobs are for losers."

As I've previously mentioned, Robert Kiyosaki and other con men like him are telling you not to go to college and not to get a job because they want you to depend on them for fake education; education that can cost north of $50,000. 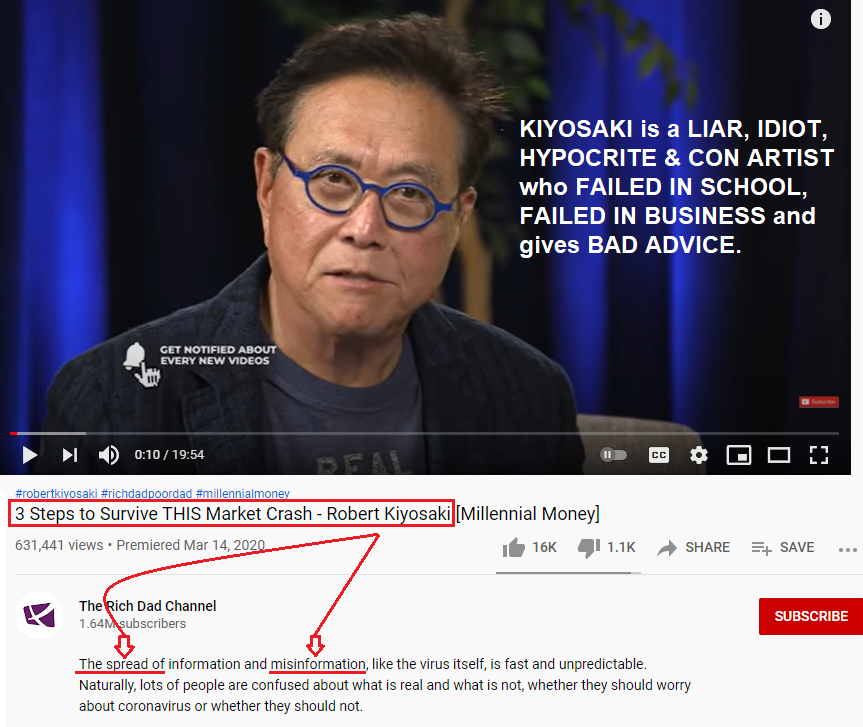 Kiyosaki has been warning about a market crash and hyperinflation ever since the stock market made its lows in March 2009.

So if you listened to this idiot, you missed out on the longest bull market in history. 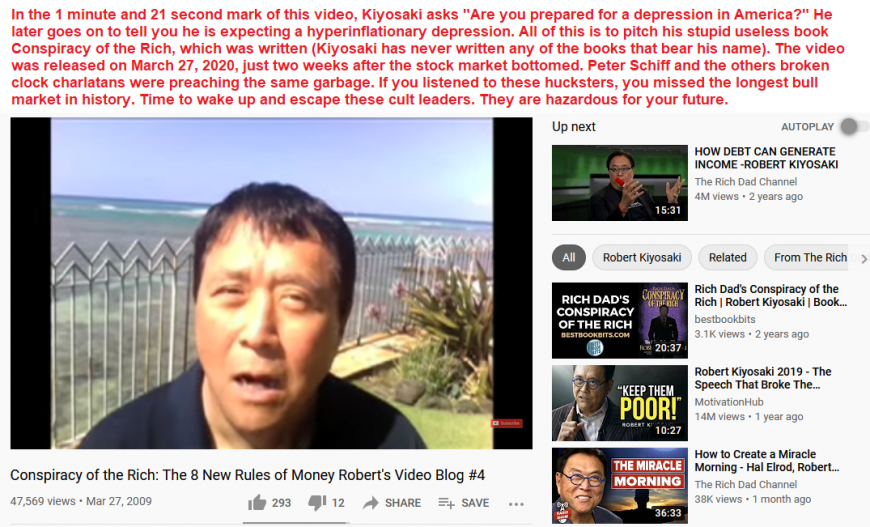 Unfortunately, most people have memories that last only a few days. 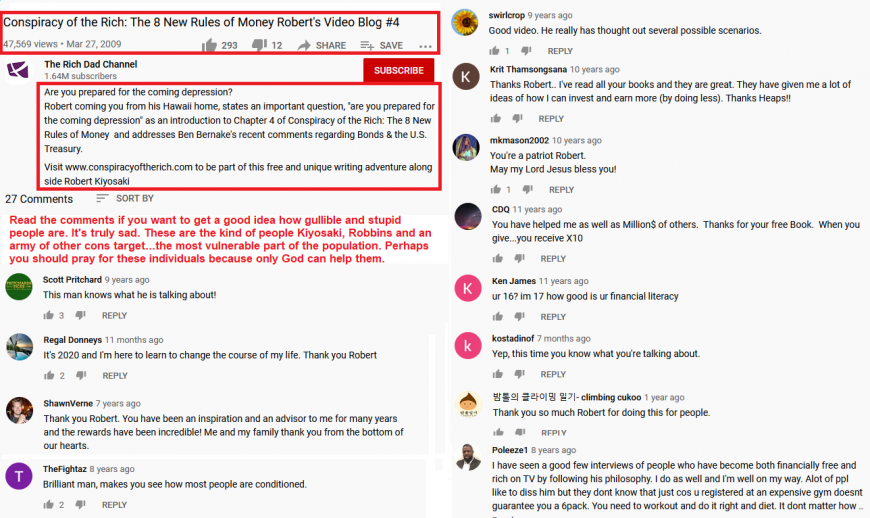 Incidentally, his philosphy also includes encouraging those who are foolish enough to listen to him to take on large amount of debt as a way to "amass a fortune."

So let's take a big picture look at Kiyoski's strategy. It goes something like this...

Avoid college, avoid getting a job and make sure you are able to expand your credit so you can take on large levels of debt.

To me it sounds like he is trying to create a cult of ignorant and incapable as well as unqualified losers who are willing to borrow money in order to get "real education."

Take a guess as to where Kiyosaki thinks you can get a "real education?"

From one of his scam seminars of course!

Who would have figured 20 years ago that the Internet would have made people so stupid that guys like Kiyosaki would be able to advise against highe education, getting a job and taking on huge levels of debt in order to fork over tens of thousands of dollars for his scaminars? Amazing.

You can't make this stuff up. Ridiculous shit like this is only possible from career con artists like Kiyosaki.

Remember, this is a guy who claims he's a great source of business and investment advice even though he has filed for bankruptcy several times.

As well, he has a long history of terrible investment advice while making unverified claims.

As I've previously mentioned, Robert Kiyosaki and other con men like him are telling you not to go to college and not to get a job because they want you to depend on them for fake education; education that can cost north of $50,000.

I have no doubt that Robert Kiyosaki is going to burn in Hell.

Incidentally, it was no coincidence that Kiyosaki and Trump teamed up to put their name on two books (which were ghost-written) that catered to the masses. They both went on to run scam seminars and universities.

Instead, remain ignorant and keep using the internet for your source of knowledge and information so you will become desperate enough to fall for Kiyosaki's scaminars or even Trump University. Sounds like a great plan!

If you have the time to waste, you might want to watch the video below.

If in fact you decide to watch the video, it should be an easy task to chop it up into dozens of clips showing how Kiyosaki lies, makes up excuses for his failed predictions, and tries to align himself as some sort of populist demigod in order to reel in the large population of disenfranchised individuals.

You see, by speaking favorably of Peterson, Kiyosaki hopes to lure his cult of low-IQ sheep for which he can sell more useless (ghost-written) books and scaminars.

If you're trying to swindle people with your useless books, board games and scaminars, the best thing to do is align yourself with other charlatans who have built a large audience of gullible fools.

Remember that Peterson is a chronically depressed loser, as he has admitted.

I find it ironic that Kiyosaki claims (14min 30sec) that the biggest crooks are on Wall Street.

Everyone who is familiar with me knows that I am the most anti-Wall Street person you'll run across.

Yet, I believe Kiyosaki and other charlatans like him are even bigger crooks than those on Wall Street because guys like Kiyosaki specifically prey on people, their vulnerabilities and desperation.

Sure, Wall Street is filled with crooks. But most of their criminal activity is aimed towards taking money without targeting individuals. They engage in securities fraud for the purpose of enriching their bank accounts.  But this modus operani does not target specific individuals.

And unlike Kiyosaki and others like him, Wall Street certainly doesn't make money by masquerading as the good guys.

Over the years, Kiyosaki has moved into the anti-establishment realm as a way to leverage the huge audience created by a long list of charlatans like Ron Paul, Alex Jones, David Stockman, Nomi Prins, Peter Schiff and countless others.

This pitch is also used by gold and silver charlatans as well as cryptocurrency promotors. I've talked about this approach many times in the past.

Whenever you see this tactic you should know that you are dealing with a very cunning and possibly quite dangerous con artist.

Remember, although the establishment sucks, the alternatives are much worse.

And if you don't already realize this, I suggest you patch into my previous commentaries where I specifically explain the rational.

The reason so many people fail to realize that the "alternative" solutions provided by the Alex Jones and David Icke-like hucksters are much worse than those from the establishment is because it takes a higher level of understanding than most people possess.

Quite simply, most of these anti-establishment folks aren't too sharp.

Understand that most of these folks believe the official version of everything is wrong. Many of them think the Moon landing was staged, the Earth is flat, chem trails is a real phenomenon, the government wants to kill most of the people through vaccinations and so on.

But again, because most people aren't too sharp, targeting this crowd represents the easiest path to make money even though they are committing fraud.

I want to encourage everyone to do their part to expose the fraud Kiyosaki and call him out for the filthy disinformation parasite that he is.

Ron Paul Has a Stroke. Let's Hope That Con Man Goes Down Soon.

Through his fear-mongering, disinformation and wild conspiracies, Ron Paul has caused countless numbers of his emotional...

Max Keiser has been in the business of creating fake news for well over a decade, but not by accident nor due to ignoran...

Mike Explains One of the US Controls the World