Mike Stathis has been accurately forecasting stock market tops and bottoms ever since he predicted the Dow would collapse to 6500 year years before it happened.

And when it did happen, he advised investors to begin buying for the first time since he advised them to sell stocks back in October 2007.

Once again, Mike Stathis predicted the market top and bottom in the April and May research (Intelligent Investor and Market Forecaster).

He advised subscribers to sell stocks at a period that would later turn out to be the top. And in advance he told them when they should reenter the market.

This recommendation turned out to be the bottom of the market selloff in late May 2019. 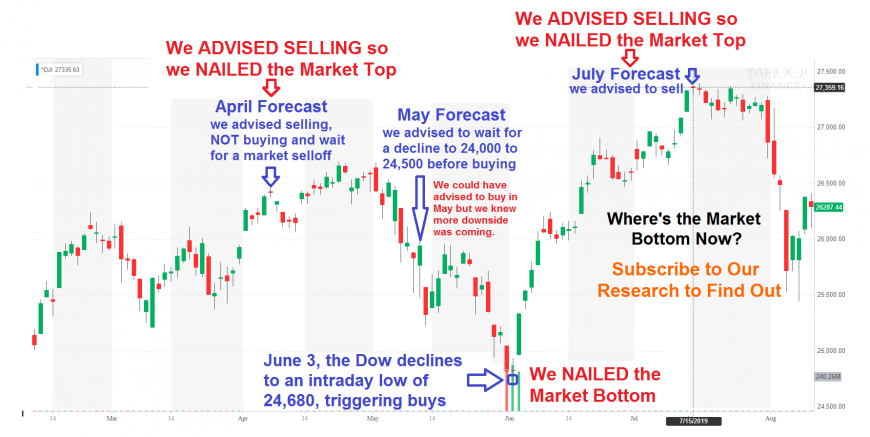 What about the recent market selloff? Did Mike also predict the top and bottom?

Subscribe to the Intelligent Investor or Market Forecaster to find out.

Below are some videos highlighting the world-leading track record of Mike Stathis.

Who Do You Think Nailed the Latest Selloff AGAIN?

Our Clients Avoided Being Exposed to the Market Collapse

The Media Has Banned The World's Leading Investment Forecaster

Mike Stathis MUST Have A Crystal Ball. He Nailed The Market Correction AGAIN (excerpts only)

Where Is The Stock Market Headed? Let's Ask The World's Best Market Forecaster

It is a fact that Mike Stathis has the best investment forecasting track record in the world since he began officially publishing research in 2006.

We are willing to go up against any credible indivdual who would like to debate this claim with us so long as each party backs their claim with at least $50,000 to be forefeited when they lose the debate (as determined by an independent panel of consultants to be compensated by the challenger, but to be selected by us).

It is also a fact that Mike Stathis is the world's best stock market forecaster.

He also has the world's best forecasting track record in commodities and precious metals since he began publishing his forecasts. Remember for instance that only Mike Stathis warned about a top in gold at $1500 to $2000 in 2009. Since then he has accurate forecast monthly trading in gold and silver with an estimated 85 to 90 percent accuracy rate.

In fact, he even forecast the current bull run in gold and recommended subscribers to our CCPM Forecaster to buy gold at around $1300.

We have sufficient basis to conclude that Mike Stathis is the single best investment analyst and strategist in the world today.

If you do not agree with this or you are not convinced it's only because you're not familiar with his full track record, including his:

1) many bankruptcy predictions in advance (with few if any false positive results; in other words, his hit-miss ratio is close to 100 percent in this category)

We could go on and on.

The best way to begin to learn about his track record is to study the content in each of the following links and then you will begin to understand that no one can match the track record and insights of Mike Stathis.

Despite his amazing track record, Mike Stathis remains the most widely banned financial professional in US history.

The Jewish media crime bosses prefer to simply ignore those who speak the truth and threaten to expose them as the best way to hide the scams from the public.

In contrast, the Jewish media crime bosses continuously promote Jewish con men and clowns who have terrible track records as a way to enrich them all while steering the audience to their sponsors, most of which are Jewish Wall Street and related firms. Figure it out folks. It's not rocket science.

And if you're Jewish you're not going to be thrown a life line by these crime bosses. They're going to feed you the same BS they feed everyone else.

Mike Stathis holds the best investment forecasting track record in the world since 2006.

Check here to download Chapter 12 of Cashing in on the Real Estate Bubble.

So why does the media continue to BAN Stathis?

Why does the media constantly air con men who have lousy track records?

These are critical questions to be answered.

You need to confront the media with these questions.

Watch the following videos and you will learn the answer to these questions:

You Will Lose Your Ass If You Listen To The Media

More from US Markets

Blast from the Past: Proof that America's Financial Apocalypse is the Single Best Investment Book in History

When people purchase investment books they do so for one reason and one reason only. They want to learn how to make mone...