Peter Schiff Gets Robert Kiyosaki to Pitch His Gold Fund

Who would you go to if you had no conscious or morals and wanted to pitch a terrible product to people?

You'd probably want to find another charlatan who has a large following of uneducated and naive people.  Most people call them "suckers."

There are many charlatans who fit the bill, namely Alex Jones, Robert Kiyosaki, Dr. Oz, and Tony Robbins, just to name a few.

Peter Schiff is the man with the terrible product to pitch.

I'll reveal what he's pitching and who he's getting to help him pitch it shortly.

We all know Schiff has made all kinds of wild claims and terrible predictions about gold, the US dollar and the US stock market in order to make gold sound appealing to naive individuals who lack the ability to think for themselves.

In the past he was pitching Valcambi "gold bars."

As you might recall, the way Schiff sold this product was quite scammy because he claimed it would preserve the value of your dollars when in fact it actually did the opposite. 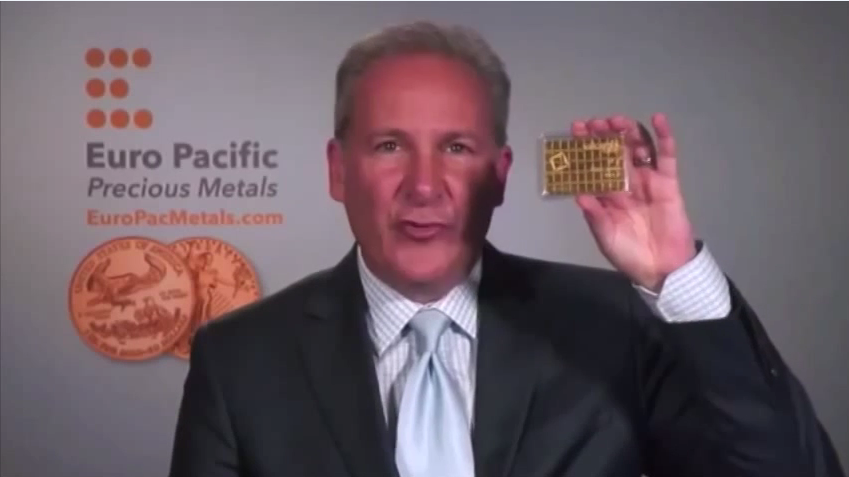 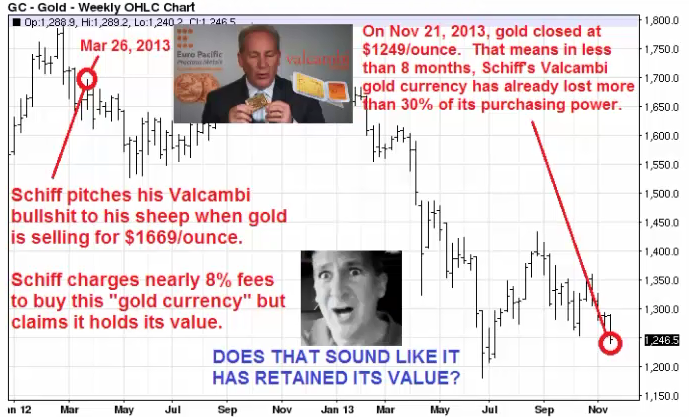 Schiff has since moved on from the Valcambi disaster unscathed. After all, he made money selling that garbage, while most people who bought it most likely lost money.

Schiff figured out a way to keep getting paid every year so long as he can convince people of his myths and fairy tales about gold, the US dollar, and the US stock market.

Instead of selling the suckers physical gold and getting paid only once, he’s now peddling fiat-based shares of gold mining stocks.

Imagine that. The same guy who insists that the US dollar is going to have very little if any value is now transacting business in dollars.

So long as he can keep people invested in his money-losing gold fund, Schiff will get paid upwards of 3% (on average, annually) of the assets under management. All he has to do is keep the BS flowing.

But the most important part of the scheme is to pitch his BS to a large audience of suckers.

But he also teamed up with Robert Kiyosaki; you know, the self-proclaimed investment "guru."

By now, it should be obvious to every sane and intelligent adult that Kiyosaki is a con man, liar and purveyor of disinformation and bad advice.

You know what they say…

“You will be judged by the company you keep.”

“Birds of a feather flock together."

Based on Schiff’s public track record (which is one of the worst I have ever seen) there's not much chance any investment he pitches is likely to do too well.

And if he has a financial interest in it, I think it’s safe to assume those chances become even smaller.

When you toss Kiyosaki's investment prowess into the pot, I can’t imagine any result other than pure disaster.

I’m assuming that he bought it within a few days of this confession (I'm willing to bet that this was a paid advertisement even though it wasn’t communicated that way).

Schiff's fund is so pathetic that it even underperformed the gold ETF (GLD) by some 600%!

Listen to these idiots in the video below. Then check the results.&nbsp;&nbsp; This proves once again that it's absolutely critical to arm yourself with a real investment expe......

This proves once again that it's absolutely critical to arm yourself with a real investment expert because there's so much garbage out there.&nbsp;&nbsp; Imagine how much mone......

Robert Kiyosaki continues to push the limits of stupidity.&nbsp; Kiyosaki's latest pitch shows how confident he is that his cult members are brainless idiots.&nbsp; His message is basically that "I...

In case you don't know who Stefan James is, here's an intro. Note there YouTube is filled with con artists like him.&nbsp; I've also exposed Kiyosaki on numerous occassions. Just use the search......

Question of the Month: Is there a bigger con man in America today than Robert Kiyosaki? That's a good question because he certainly has a great deal of competition.&nbsp;&nbsp; Even before beginnin...

I've previous exposed the TED Talks and TEDx scam used by a variety of con artists and clowns as a way to market themselves to what many preceive to be a credible platform (link below). Aside from t......

Although I've added a few images of these scum bags here, you can find a larger number of annotated images of these and many other charlatans in the image library.&nbsp; Make sure to check the image...

Scam Artist Tai Lopez is the Robert Kiyosaki of YouTube

The full version of this article (including the video) is available only to active Members and Clients.&nbsp; I'm not going to go into the notion that Kiyosaki never even wrote any of his completel...

Can You Tell the Difference Between Kiyosaki, Trudeau and Schiff?

Listen to this short audio and decide for yourself. As far as I'm concerned, they are basically the same.

Peter Schiff Gets Robert Kiyosaki to Pitch His Gold Fund

Who would you go to if you had no conscious or morals and wanted to pitch a terrible product to people? You'd probably...

Two Images Illustrate Why Gold is Owned by Dummies

Over the past decade, I've debunked every single myth pumped out by the gold and silver "experts" (i.e. pumpers) explain...

Blast from the Past: Sweet Freedom - Escaping the Jewish Precious Metals Cult